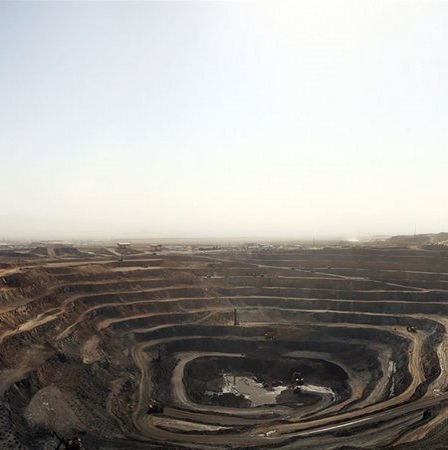 
Iran is undeniably a force to reckon with in the mining sector. The country is home to over 68 minerals, with more than 37 billion tons of proven and 57 billion tons of potential reserves.
According to the United States Geological Survey, Iran holds the world's largest zinc, ninth largest copper, 12th largest iron ore and 10th largest uranium reserves. Overall, Iran holds more than 7% of global mineral reserves.
Aware of this huge potential, many countries have flocked to Iran ever since the removal of sanctions imposed on Iran over its nuclear energy program and signed massive agreements in the mining sector. These companies are not only willing to invest in the sector, but are also capable of providing the mining industry with the latest production technologies.


South Korea is set to provide projects in Iran's mining industries with €1.15 billion of financing, announced deputy minister of industries, mining and trade, Mehdi Karbasian, on Saturday.
According to Karbasian, the financing is part of a memorandum of agreement scheduled to be signed during the South Korean President's upcoming Iran visit. Park Geun-hye, accompanied by Seoul's biggest-ever travelling business delegation of over 230 executives, is to arrive in Tehran for a three-day visit on Sunday.
Karbasian added that the MoU includes supplying Iranian steelmakers with state-of-the-art FINEX technology.
FINEX is a steelmaking technology developed by Austria-based engineering and plant building company Siemens VAI and Pohang-based multinational steelmaking company POSCO.
This February, POSCO signed a memorandum of understanding with Iran’s Pars Kohan Diar Parsian Steel to build a plant with an annual production capacity of 1.6 million tons in Iran’s Chabahar free economic zone.

Representatives of China Nonferrous Metal Industry's Foreign Engineering and Construction Company have expressed readiness to undertake joint ventures with Iranian companies and to provide them with the latest technology in the production of nonferrous metals.
Qin Junman, the acting manager of NFC, made the statement during a meeting with Karbasian, who is also the head of Iranian Mines and Mining Industries Development and Renovation Organization, at IMIDRO's headquarters in Tehran on Friday.
Referring to the Chinese government's newfound vigor for reducing energy consumption in the country's industries, Junman noted that NFC intends to supply Iranian aluminum, copper, coal, gold, lead and zinc factories with eco-friendly technologies
"Considering Iranian aluminum companies' demand for raw materials such as bauxite and alumina, NFC is ready to establish a joint company with Iranian firms to procure and transfer raw materials from other countries to Iran," the Chinese official added.
NFC, established in 1983, is China's largest project contractor for nonferrous metal exploitation and has already cooperated with Iranian firms in projects such as construction of a new plant for Iran Aluminum Company, establishment of Iran Alumina Company and Almahdi Hormozal Aluminum Company.
IMIDRO also hosted the President of Confederation of Indian Industry Naushad Forbes, who was accompanied by a delegation of 18 major Indian companies in Tehran on Wednesday.
“Exploration, technology and marketing sectors of Iran’s mining industry have great growth potential that could be exploited,” IMIDRO quoted Forbes as saying during a meeting with Karbasian.
Mining industry machinery and equipment, raw materials, energy, decorative stones and cement are also sectors in which Indian businesses are willing to cooperate with Iran.
Karbasian welcomed the prospect of Indian companies' presence in Iran's mining sector and pointed to finance and investment as potential cooperation areas between Tehran and New Delhi.
Back on Tuesday, two large-cap Australian companies visited Tehran and expressed readiness to invest in Iran's mining sector. Colin Roberts, managing director of Multilateral Investment Guarantee Agency, and Terry Stanley, managing director of Ore Search Drilling Company, met with Karbasian and discussed investment in Iran's copper and gold mines.
The two companies have a strong presence in mining projects all over the world. MIGA, a member of the World Bank Group, aims to promote foreign direct investment into developing countries to help support economic growth.
OSD is a global player in mineral exploration and various types of drilling, and has operated in West and Central Africa as well as South America
Other foreign companies that have invested in Iran's mining sector, or have provided Iranian companies with industrial equipment, machinery and technology ever since the removal of sanctions include Italy's Danieli Group, French Fives Group, German SMS Group and the Spanish Sarralle.


The government seeks to prop up the mining sector's growth and bank in on its potential to generate more revenue than crude oil exports earn, especially given that oil prices have drastically fallen and it will take some time before Iran can reach pre-sanction oil production and export levels.
To this end, the government has devised a 20-Year Vision Plan (2005-25) aimed at attracting $20 billion in foreign mining investment to boost production targets across the spectrum of the country's industrial sectors.
The grand plan entails the annual production of 55 million tons of steel, 800,000 tons of copper, 1.5 million tons of aluminum, 300,000 tons of zinc and 5 tons of gold by the end of 2025.
Furthermore, the government requires banks to give lending priority to miners, effectively enabling solid expansion growth prospects
According to Business Monitor International, Iran's infrastructure boom will invigorate domestic demand for steel and iron ore over BMI's forecast period to 2024.
The group forecast the country's construction industry value to rise from $20.7 billion in 2015 to $41.8 billion in 2024. This represents a solid annual growth average of 2.9% up to 2024.